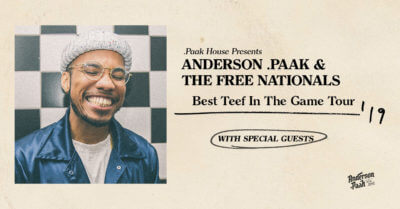 Music Festival, Anderson .Paak has announced he has added highly anticipated Southern California dates to his Best Teef In The Game Tour this year. Paak will return to Los Angeles for his first ever headline show at The Forum on June 29th, also marking his first L.A. headline show in 3 years since headlining the Hollywood Palladium in  2016. To celebrate the Forum show .Paak has released a short 1 minute animated video that he scored with his friend Thundercat.

Anderson also announced he has added a San Diego date on June 26th at the Cal Coast Credit Union Open Air Theatre. Thundercat and Earl Sweatshirt will join both dates.Tickets for both dates will go on sale to the general public beginning Friday, April 26th at 10am PT at LiveNation.com. American Express® Card Members can purchase tickets in select markets before the general public beginning Wednesday, April 24th at 10am PT through Thursday, April 25th at 10pm PT.

Produced by Live Nation, Paak’s Best Teef In The Game Tour is his biggest yet, with previously announced dates that include Madison Square Garden, Red Rocks and support from Thundercat on the entire tour as well as Earl Sweatshirt, Noname, Mac DeMarco and Jessie Reyez on select dates (full dates and support below).

‘Ventura‘, released via Aftermath Entertainment exclusively distributed by 12 Tone Music, LLC., also landed at # 1 on the R&B and R&B /Hop Hop charts along with #2 on the Indie charts. The album was executive produced by Dr. Dre and features Smokey Robinson, André 3000, Jazmine Sullivan, Brandy, Nate Dogg and Lalah Hathaway. Venturaswitches gears to soul from the grit and urgency that Oxnard brought acting as a juxtaposition to the two towns where .Paak grew up. Anderson explains: “Growing up in Oxnard gave me the grit and the church to find this voice of mine. One town over I went further and found my depth. The duality of each place inspired me greatly and from that I made two albums at the exact same time but held one back because that would have been too many songs to perform live for you all! I like ending things on an even number so welcome to ‘Ventura'”.

Thundercat is on all dates